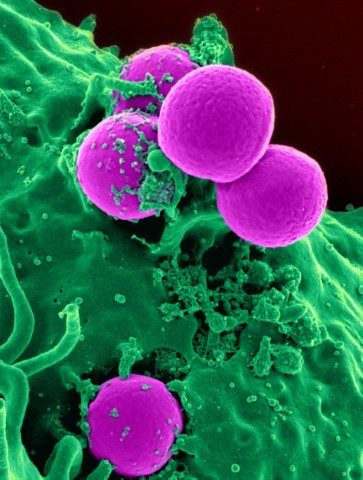 ACS: Public health officials are increasingly concerned over methicillin-resistant Staphylococcus aureus (MRSA). The bacteria have developed resistance to a number of treatments, even antibiotics of last resort in some cases. Now researchers report in ACS’ journal Bioconjugate Chemistry that a new class of compounds can treat MRSA skin infections in mice with no signs of acute toxicity, and no signs that the bacteria would develop resistance to them after many applications.

According to the U.S. Centers for Disease Control and Prevention, every year at least 2 million people in America become infected by bacteria resistant to antibiotics, and 23,000 people die from such infections. Researchers have been working to combat this major public health threat for years. One of the latest fronts in this fight involves antimicrobial peptides and lipopeptides, which can destroy bacterial membranes. But translating these molecules into clinical products has been difficult. More recently, researchers have developed a new class of membrane-busting compounds called lysine-conjugated aliphatic norspermidine analogues (LANAs) that have been effective at killing certain bacteria and the Ebola virus in lab tests. Mohini Mohan Konai and Jayanta Haldar wanted to see if these compounds could also work against MRSA.
The researchers found that LANAs were effective against four MRSA strains in lab experiments. Testing on mice showed that the compounds could eliminate MRSA skin infections, which form notoriously difficult-to-treat biofilms. Even after 20 passages, the MRSA bacteria failed to develop resistance to the compounds. The results suggest that LANAs could be strong contenders for treating MRSA skin infections, the researchers say.