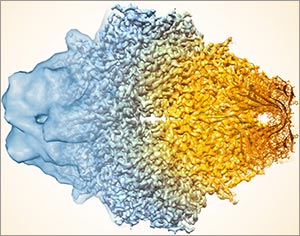 NIH: Cell biologists would love to shrink themselves down and actually see, touch and hear the inner workings of cells. Because that’s impossible, they have developed an ever-growing collection of microscopes to study cellular innards from the outside. Using these powerful tools, researchers can exhaustively inventory the molecular bits and pieces that make up cells, eavesdrop on cellular communication and spy on cells as they adapt to changing environments. In recent years, scientists have developed new cellular imaging techniques that allow them to visualize samples in ways and at levels of detail never before possible. Many of these techniques build upon the power of electron microscopy (EM) to see ever smaller details.

Unlike traditional light microscopy, EM uses electrons, not light, to create an image. To do so, EM accelerates electrons in a vacuum, shoots them out of an electron gun and focuses them with doughnut-shaped magnets onto a sample. When electrons bombard the sample, some pass though without being absorbed while others are scattered. The transmitted electrons land on a detector and produce an image, just as light strikes a detector (or film) in a camera to create a photograph.
Transmission electron microscopes can magnify objects more than 10 million times, enabling scientists to see the outline and some details of cells, viruses and even some large molecules. A relatively new form of transmission electron microscopy called cryo-EM enables scientists to view specimens in their natural or near-natural state without the need for dyes or stains.
In cryo-EM—the prefix cry- means “cold” or “freezing”—scientists freeze a biological sample so rapidly that water molecules do not have time to form ice crystals, which could shove cellular materials out of their normal place. Cold samples are more stable and can be imaged many times over, allowing researchers to iteratively refine the image, remove artifacts and produce even sharper images than ever before.
Thanks to a new generation of detectors and improved image-processing software, cryo-EM enables extremely high magnification. The level of detail, or resolution, of cryo-EM imagery now rivals that obtained with X-ray crystallography, which provides the exact location in space of every atom in a molecule (though under conditions that are far from natural).

After decades of black and white electron microscopy images, scientists now have a way to incorporate color. Credit: Adams et al., Cell Chemical Biology 2016.
Some scientists are using cryo-EM to create three-dimensional models, or maps, of molecular complexes. To make these models, scientists record thousands of two-dimensional images of a single sample, or a set of identical samples, viewed from many different angles. Then, they use specialized computer programs to combine these snapshots into extremely detailed 3-D models. This technique is yielding new information on the structures of biological molecules and on how these molecules function and interact.
Historically, EM images have only been in black and white. In late 2016, a group of researchers that included the late Roger Tsien—who won a Nobel Prize for bringing color to light microscopy using green fluorescent protein—published the first ever color EM images. The technique uses rare earth metals called lanthanides to label different biomolecules. This multicolor EM is already providing scientists with previously unobtainable information about cell structure, protein movements within and between cells, and views of cell components at a level of detail not possible with light microscopy.
Published by Dr Guichard MD à 3:15 AM
Email ThisBlogThis!Share to TwitterShare to FacebookShare to Pinterest
Labels biology, microscope, technology
Newer Post Older Post Home