The how, what and why of the latest HIV vaccine trial 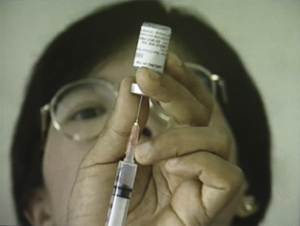 TheConversation: As the global quest for an HIV vaccine continues, Linda-Gail Bekker explains the significance of the latest large-scale trial underway in South Africa.
What’s the significance of the trial for the global fight against HIV?
The world needs an HIV vaccine. Our prevention toolbox is better than it has ever been. But there is increasing recognition that the world needs to scale up primary HIV prevention.
Effective vaccination is the poster child for prevention – it is the thing we are missing. If we can get that we can talk about eliminating HIV across the world.

It is fantastic that once again a vaccine is being put into the field. The only way scientists can really learn and understand human immunity is through human clinical trials. I think everyone agrees that laboratory and animal research can only take us so far.
There has been a decrease in the incidence of HIV in some parts of the world. The best news is the impressive downturn in mother-to-child-transmission.
But this is an epidemic that needs constant surveillance because it is still on the rise in many parts of the world. We cannot be complacent. Reduction rates in adult infections are stalling. We are not on course to meet the targets set for 2030 to get the epidemic under control.
But we shouldn’t hang everything on getting a vaccine, as important as that is. The world also needs a primary prevention revolution. If we are really intent on getting the epidemic under control by 2030, we need a call to prevention action while working hard on a definitive vaccine.
What does the trial entail? How will it be done?
This trial – HVTN 702 – is based on a trial from Thailand in 2009 which showed a 31% reduction in HIV after three years. It is important to note that after 12 months the vaccines showed 60% efficacy.
In the South African study we are hoping to increase the potency and durability of its effect to reach at least a 50% reduction in HIV infection after three years.
There will be 5400 participants aged between 18 and 35 (the most at risk age group) at 15 sites across South Africa. And there are two vaccine products in the regime. The participants will get five shots over the first year. Some of the shots include just one product and some involve both products. The shots are given into the muscle of the upper arm by injection, much like a tetanus or measles vaccine.
This is an efficacy trial. The main question it will answer is: does the vaccine work? To get to this question, the trial is designed so that half of the cohort will get a sham vaccine and half will get a real vaccine, with neither research site staff nor participant knowing which. The cohort will then be followed up after three years when the number of infections in each cohort will be counted.
At that point we will ask whether more infections occurred in the one cohort compared to the other. We will then be able to conclude whether and by what margin the vaccine has been able to prevent HIV infections. That will give us an indication of the vaccine’s efficacy.
This trial also follows an initial “lead in” safety and immunogenicity trial (HVTN100) of the vaccine regimen conducted last year with 252 people in six sites in South Africa. This gave the green light for the HVTN 702 trial.
How is this trial different from the one in Thailand?
The vaccine being used in South Africa is very similar to the one used in an earlier trial in Thailand (RV144). The virus products in that vaccine – RV144 – were designed to reflect the HIV that is circulating in Thailand (subtype BE). In the last five years scientists have modified the inserts in the vaccine to be compatible to the subtype of the virus circulating in southern Africa (subtype C).
Apart from the different inserts, scientists have also changed the adjuvant, which is an agent often used with vaccines to give the immune system an additional boost. In Thailand the adjuvant alum was used. In South Africa we are using a well known adjuvant called MF59, which is also widely used in the flu vaccine.
The last thing we are doing differently in this trial is that the South African participants will receive an additional vaccine boost at 12 months. In Thailand everyone got all their boosts within the first six months.
When will first results be known? And then what happens?
It will take us 12 to 18 months to accrue participants. The study will end when all participants have completed three years of the vaccination regime.
During the three years there will be opportunities for a special safety committee to look at the data in an “unblinded” fashion to check whether we have a winner early on, whether the trial is not going to yield any meaningful results or if there are important safety concerns.
This is important because if the vaccine is shown to be working we will be able to move towards licensing the vaccine for HIV.
In addition, the minute we know it works we would want to do bridge studies in other parts of Africa and then in other parts of the world.
Why is this trial being done in South Africa?
The trial is a partnership between a number of entities, vaccine developers and funders, including the South African Medical Research Council. Southern Africa was chosen as the trial site because of the very high burden of infection in the region.
It is important to see if we can get a vaccine that works in the world’s toughest region.
Up to 300 young women get infected with HIV in South Africa every day. The overall prevalence in South Africa is 19.2% but we know there is a wide range across areas and some populations are more affected than others.
South Africa has 7 million people with HIV, almost one-fifth of the global HIV positive population. It treats more people than any other country with anti-retrovirals, consuming one-quarter of global generics.